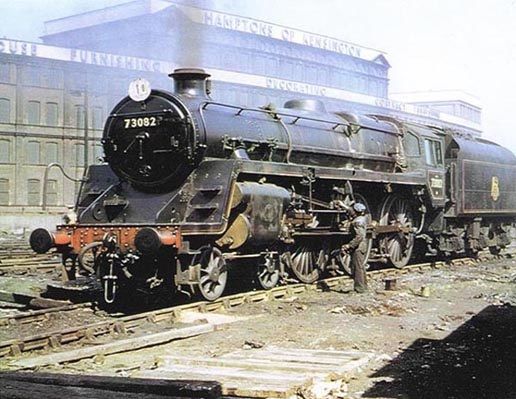 1963. Although not allocated to Bath Green Park or Bournemouth West, Camelot was observed at Green Park. This is the only confirmed sighting (so far) on the Somerset and Dorset Railway.1965. Continuing electrification of the South Western Division further reduced the need for steam. Re-allocated to Guildford. There were sightings on the Western Region Main Line during this time, so Camelot must have worked through to Reading and beyond.

The long road back, rebuilding the locomotive at Sheffield Park.

Back in service for the first time

1995. Re-entered traffic on the Bluebell Railway.

1995. The CCT was left largely empty, with most of the parts back on the locomotive. At some date unrecorded, was moved to Kingscot. Its condition deteriorated over time.

2005 - 2006. Conservation work: oiling; tender tank and coal space emptied, cleaned and repainted.2007. Dismantling started, parts removed and stored, boiler lifted.2008. Removal, fettling and storage of parts continued. Parts of the boiler and chimney found to need repair, smokebox required scrapping and replacement, new one fabricated. Front tube plate removed, new one ordered from external supplier.2009. Frames lifted, cleaned and painted. Wheelsets cleaned. Cab removed from frames.2010. Cleaning and painting continued. New smokebox undercoated. Wheelsets sent to South Devon Railway for new tyre fitting. Cannon boxes and bearings repaired and repacked with grease.2011. The South Devon Railway workshop completed work on the wheelsets and returned them. Work started on the frame stretchers and hornguides. A rear dragbox drawing was obtained for fabricating a new one on contract.2012. The South Devon Railway pressed a new front tubeplate and constructed a new firebox backhead. Bluebell Railway workshop staff constructed a new rear dragbox. Work continued on the small parts. Bluebell Railway decided to fund boiler repairs, to be carried out on contract.2013. The contract to repair the boiler was let to the London and North Western Railway and the boiler was sent off to Crewe. After a stage inspection at Crewe in December, LNWR were authorised to complete the job.At Sheffield Park, Bluebell Railway Workshop delivered the S15 locomotive 847 back into traffic, leaving room to move Camelot's frames and wheelsets back inside, where work could be done under cover.2014. By December, LNWR Crewe were ready to conduct the hydraulic and live steam tests on the boiler. At Sheffield Park, with shedloads of space working in the shed, the frames, wheels, cylinders, motion and cab were reassembled.2015. The boiler passed all tests in January and was returned to Sheffield Park. February to September saw a frenzy of reassembly, and painting by Heritage Painting. The last month saw:28 September, first steaming since 2005, and first move under her own power.29 September, boiler was retested, and a new ten year certificate issued.20 and 21 October, light engine running-in turns.25 October, hauled the Society's AGM Special.

Back in service again

Initially the locomotive ran in her pre-1959 state, un-named and with a Stewart's Lane shedplate.

2016. The locomotive recieved her nameplate and Nine Elms shedplate back.

Members of the Bluebell Railway Carriage and Wagon Department started to restore the CCT, which was moved back to Horsted Keynes.2018. Camelot made her first "away trip" to the West Somerset Railway's Autumn Gala.

2020. "Camelot" was wintered at the start of 2020, but was expected to return to service at Easter. In the event, the Bluebell Railway was forced to close during the pandemic lockdown and the locomotive had an unexpected rest, locked down in a shed. Camelot returned to service on 16 August when the Railway reopened with "social distancing" rules.

C&W members completed work on the CCT, which entered the railway's heritage fleet. At the end of October the Bluebell Railway held a goods vehicle gala event "Off the Rails" and the CCT ran over the line in goods and mixed trains.

At the end of the year, locomotive crews reported that the firebox had developed a leak.

The Bluebell Railway’s Locomotive Workshop decided that the boiler should be lifted for the fiebox repair. They agreed with the Society, to use the lift as an opportunity to overhaul the boiler and obtain a new ten year Boiler Certificate.

Boiler cladding and the brick arch had been removed, and work started to replace the foundation ring rivets, by the end of the month.

Driving wheels back in place, bogie wheels removed for attention.

Test in Steam with the Inspector, who issued a new 10-year Boiler Certificate, Locomotive moved for the first time, as far as the Sheffield Park advance signal, 16th.

Locomotive provisionally rostered to appear at the "Giants of Steam" Gala in October.

Three test runs 28th, two to Kingscote and one to East Grinstead.