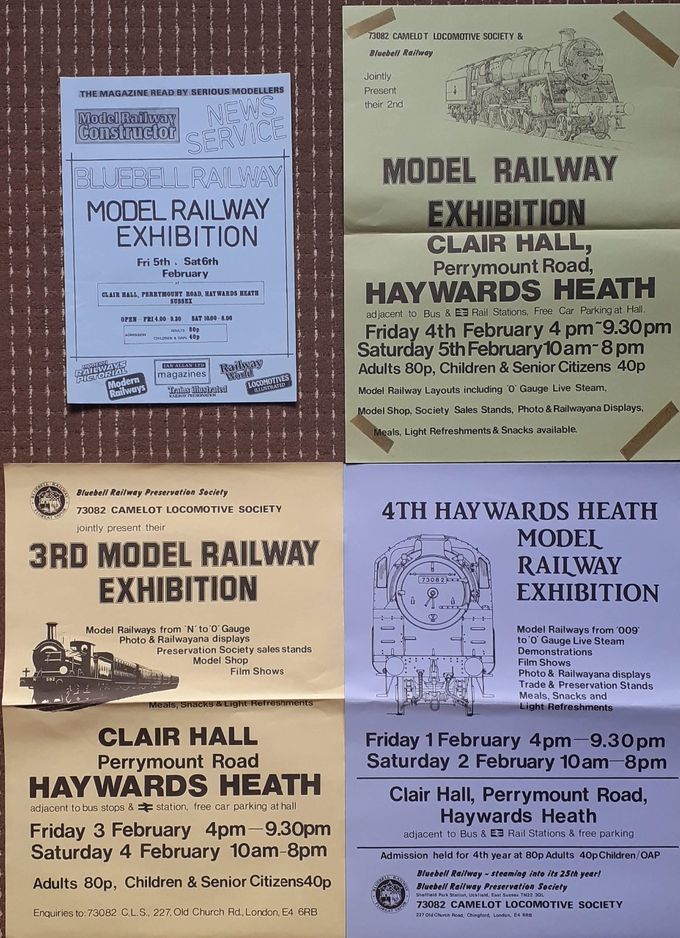 The Society held a Model Railway Exhibition (MRE) in Surbiton in 1977 and two more in 1979 and 1980 in Eastleigh. The Eastleigh events were organised with the Urie S15 Society. Four more MREs were held on Haywards Heath in 1982 – 1985, with the Bluebell Railway Preservation Society. 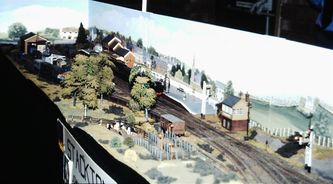 In 1982 the Bluebell Railway wished to celebrate the Centenary of the opening of the Lewes and East Grinstead Railway in 1882 by organising various special events and asked each of the groups associated with the railway to put these on. Our Society found itself putting on two events, a model railway exhibition, jointly with the Bluebell Railway Preservation Society, and an exhibition of photographs of BR Standard locomotives.

None of the committee members of the Society had much previous experience of organising either type of exhibition but fortunately the model railway exhibition became a reality under the more experienced guidance of Martin Allen, at that time a member of the Maunsell Locomotive Society. Camelot Society members Glenn Wallis and Francis Dowley formed a group of three joint exhibition managers with Martin. Using the benefit of Martin’s experience with model railway exhibitions our sub-committee meetings took place at Martin’s flat.

The Clair Hall in Haywards Heath appeared the most suitable venue, a spacious and modern facility centrally located close to the railway station, so that visitors would find it easy to travel to the event. Organising the exhibition involved producing a printed programme, liaising with the Council that owned the hall, St. John’s Ambulance Brigade, the owners of model railway layouts and with fund-raising enthusiast organisations which would be prepared to pay for their pitches, hopefully to produce a profit to support the preservation activities of the two organising Societies. Naturally, we reserved plenty of space for our Society’s own stand!  There were also stands for some of the other Bluebell based groups and projects. Refreshments were provided by the Bluebell Railway.

The 1982 event proved to be a success and according to the report in the Spring issue of Footplate   2,100 visitors attended the first show. All 500 copies of the programme sold out and the estimated profit from admission tickets, before splitting two ways, was estimated to be around £900. The exhibition was repeated at the same venue in subsequent years, and the following visitor numbers were recorded -  1,800 in 1983, 1,700 in 1984, and 1,900 in 1985. Apart from various layouts in different gauges, the exhibitions also had vintage film shows and railwayana displays.

Exhibition programmes and advertising posters were produced. For the first show in 1982, Ian Allan Publishing helped with some simple A3 sized posters, and they advertised Model Railway Constructor magazine. In subsequent years Glenn Wallis produced them using Letraset transfers, which looked very professional and impressive!  Remember, this was in the early days of home computing. The Sinclair ZX81 computer had only just come out, and nobody had heard of Windows software or Microsoft.

After 1985 it wasn’t possible to put on more shows, as we would have had to charge VAT on the admission prices, and the cost of hiring Clair Hall had gone up. Additionally, the council insisted that the ‘in-house’ caterer at Clair Hall had to be used for refreshment services. This further reduced the financial viability of the exhibitions, as it appeared that we were expending a lot of effort, without making much profit. In a report in the Summer 1985 issue of Bluebell News, Glenn Wallis reported that the profit to Bluebell and Camelot was estimated to be £70 to each organisation!  It is sad to know that the owning Council has recently decided to close Clair Hall permanently, due to its poor condition.

The photographic exhibition was organised by Jon Alder and Francis Dowley; the first step was that the Bluebell’s Gangwayed Bogie Luggage Van (GBLV), located at Horsted Keynes station, had to be repainted internally with white paint to make it presentable and to give more light. Jon and Francis spent several weekends on this task, with the assistance of two Bluebell volunteers. Bluebell provided the display boards; the superb black and white print enlargements that we attached to them were generously loaned to us by Brian Stephenson of Rail Archive Stephenson fame; Francis spent a wonderful evening enjoying the freedom of Brian’s photo filing system selecting representative views of each of the BR Standard classes.

Sadly we’ve not been able to find any photos of the photographic exhibition and only a few of the 1985 model railway exhibition. Fortunately copies of the programmes and posters still exist to show that the Society has organised a diverse range of events, apart from restoring Camelot from Barry scrapyard condition!