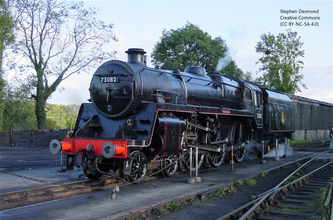 This paper originally appeared in “73082 CAMELOT From Barry to Bluebell”, published by the 73082 Camelot Locomotive Society in June 1996. It gives a brief survey of the descent of the BR Standard 5 design from its GWR and LMS predecessors, and of the construction history of the class.

Although the connection may not seem obvious, it can be shown that the BR Standard Class Five design had its origins in the Saint class 4-6-0 of the Great Western Railway, introduced by Churchward in 1902. This was the first 'modern' two cylinder 4-6-0 with outside connecting rods (albeit with inside Stephenson link motion), a taper boiler and Belpaire firebox.

The Saint was an express passenger locomotive but Churchward's successor, Colletl, introduced a mixed traffic version of the design in 1928, the Hall class. The prototype, 4900 Saint Martin, was actually a rebuild of the Saint 2925, which carried the same name, but with 6ft driving wheels as opposed to the 6ft 8in of the Saint.

When Stanier, Collet's assistant at Swindon, became Chief Mechanical Engineer of the London, Midland & Scottish Railway he took many Swindon ideas with him. His early experience with the Jubilee class 4-6-0 showed him that high superheat would be more effective than the low superheat favoured on the GWR, and the famous Black Five mixed traffic 4-6-0 was a development of the Hall with outside Walschaerts valve gear and high superheat.

The link between the Black Five and the BR Standard Five is much clearer of course, the Standard Five being a very similar design but featuring the rocking grate and hopper ashpan applied to all the BR Standard types, roller bearings throughout and the high running plate. All these items were intended to ease maintenance work in the face of growing difficulties in recruiting staff after the Second World War and the arrival of cleaner and better paid forms of employment, such as motor manufacturing.

The BR Standards evolved as a result of the 1948 Locomotive Exchanges, shortly after Nationalisation. These trials had been held in order to establish the best features of the locomotives of the Big Four railway companies so that they could be incorporated in the new Standard designs. In the end, the designs were based largely on LMS practice because this company had gone furthest in introducing new steam locomotives which could cope with post-War conditions.

This meant that the Standard Class Five 4-6-0 was very similar dimensionally to the Stanier Black Five and the boiler was essentially the LMS 3B type with different detail and fittings to match the rest of the BR Standard range. Doncaster was responsible for the design of the class and built 42 examples (73100-124,73155-171), but the other 130 were built at Derby. Construction began in 1951 and ended in 1957. The 30 engines with Caprotti poppet valve gear (73125-54) were built at Derby in 1956.

Concentrating on the Standard Fives built specifically for use on the Southern main lines, 73080-89 and 73110-119, these were constructed in 1955. The first batch was built at Derby to Works Order number N8241, BR Lot number 241 (this covered locomotives 73075-89). They were paired with BRIB tenders of 7 tons coal and 4,725 gallons water capacity and the cost per engine and tender was.£2l,750. The second batch was erected at Doncaster at an overall cost of £22,783 per engine and tender. The Works Order number was 403 and the BR Lot number 1396. BR1F tenders, the largest in the Standard range with capacities of 7 tons coal and 5,625 gallons water, were provided for these engines. Large water capacity tenders were necessary for all the Southern Standard Fives owing to the absence of water troughs on the Southern Region. 73050-52 were also built for the Southern but were allocated to Bath Green Park (71G), specifically for working over the Somerset & Dorset line from Bath to Bournemouth.

Additional lamp brackets were provided in the Southern Region positions on either side of the smokebox door and on the rear of the tender. Locomotives allocated to Weymouth received dual lamp brackets (GWR and SR style) in all positions.

These 20 Standard Fives were unique in being the only members of their class to receive names during service with British Railways. A Staff Suggestion put forward the idea of transferring the names from withdrawn Urie King Arthur 4-6-0s numbers 30736-55 to the Standard Fives and the scheme was officially adopted in May 1958. The names were allocated to the individual locomotives six months later and nameplates were fitted, without ceremony, as the locomotives passed through Eastleigh Works. The nameplates were similar to those on the original King Arthurs in that they were straight with tapered ends, but did not carry the legend 'King Arthur Class' under the name. When mounted on the valance of the running plate the centre of the nameplate coincided with the centre line of the dome on the boiler. Table 1 shows which names were allocated to which Standard and the N15 which carried the name originally.

Livery of the Southern Standard Fives was black, lined with red, grey and cream. In order to distinguish locomotives equipped with the French TIA water-softening apparatus, a yellow spot was painted on the cabside, below the locomotive number. Unfortunately, this caused confusion the yellow spot of the GWR route availability code, usually found in the same position, so the TIA indicator was changed to a yellow triangle.

The first batch, 73080-89, was originally allocated to Stewarts Lane and the second batch, 73110-19, to Nine Elms. Following implementation of the Kent Coast electrification in 1959, all 20 were allocated to Nine Elms. In later years further reallocations followed to Feltham, Guildford, Eastleigh and Weymouth and two of the class, 73087 and 73116, were regularly loaned to Bath Green Park to help out with the heavy summer holiday traffic over the Somerset & Dorset line to Bournemouth. The first to be withdrawn was 73116 in November 1964 and the last were 73085 and 73118 in July 1967, when steam traction was eliminated altogether from the Southern.

73082 Camelot was the only one of these engines to be sold to Woodham Brothers yard in Barry and is the only preserved Southern Standard Five. The other preserved Standard Fives are 73050 (Nene Valley Railway), 73096 (Mid-Hants Railway), 73129 (Midland Railway Centre, Butterley) and 73156 (East Lancs Railway).